Lost in the Front Yard 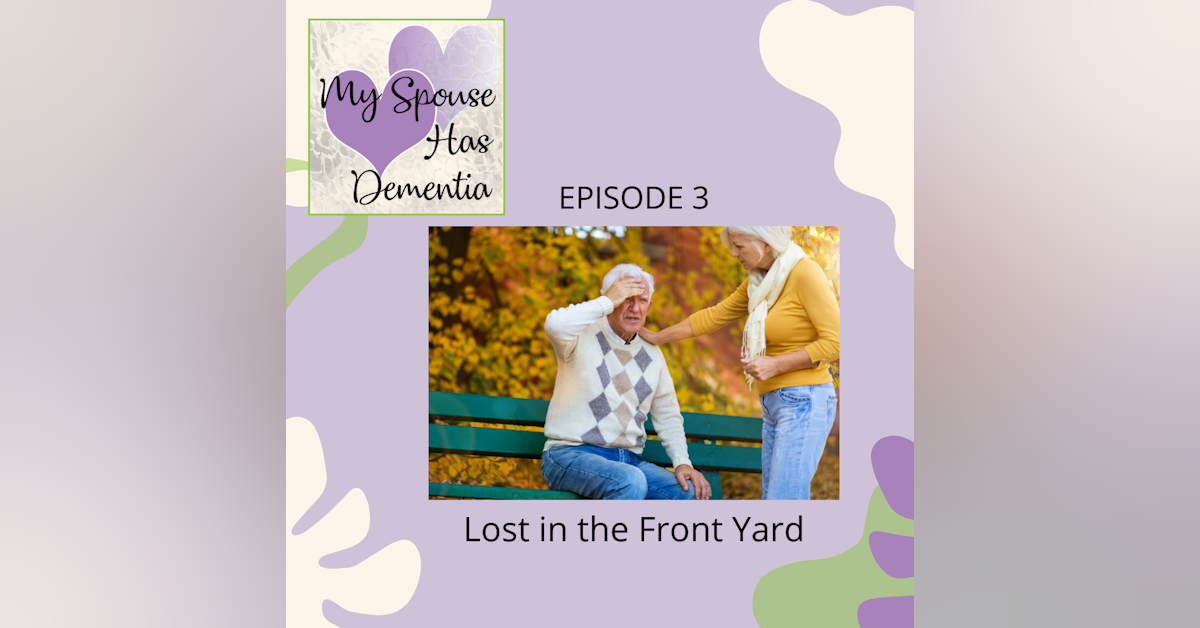 More than 20 years ago, my husband successfully thru-hiked the Appalachian Trail. More recently, he took a walk in our small condo complex. When he was finished, he got frustrated because his key wouldn't unlock the front door. It wasn't our front...

More than 20 years ago, my husband successfully thru-hiked the Appalachian Trail. More recently, he took a walk in our small condo complex. When he was finished, he got frustrated because his key wouldn't unlock the front door. It wasn't our front door.

Episode 3:   Lost in the Front Yard 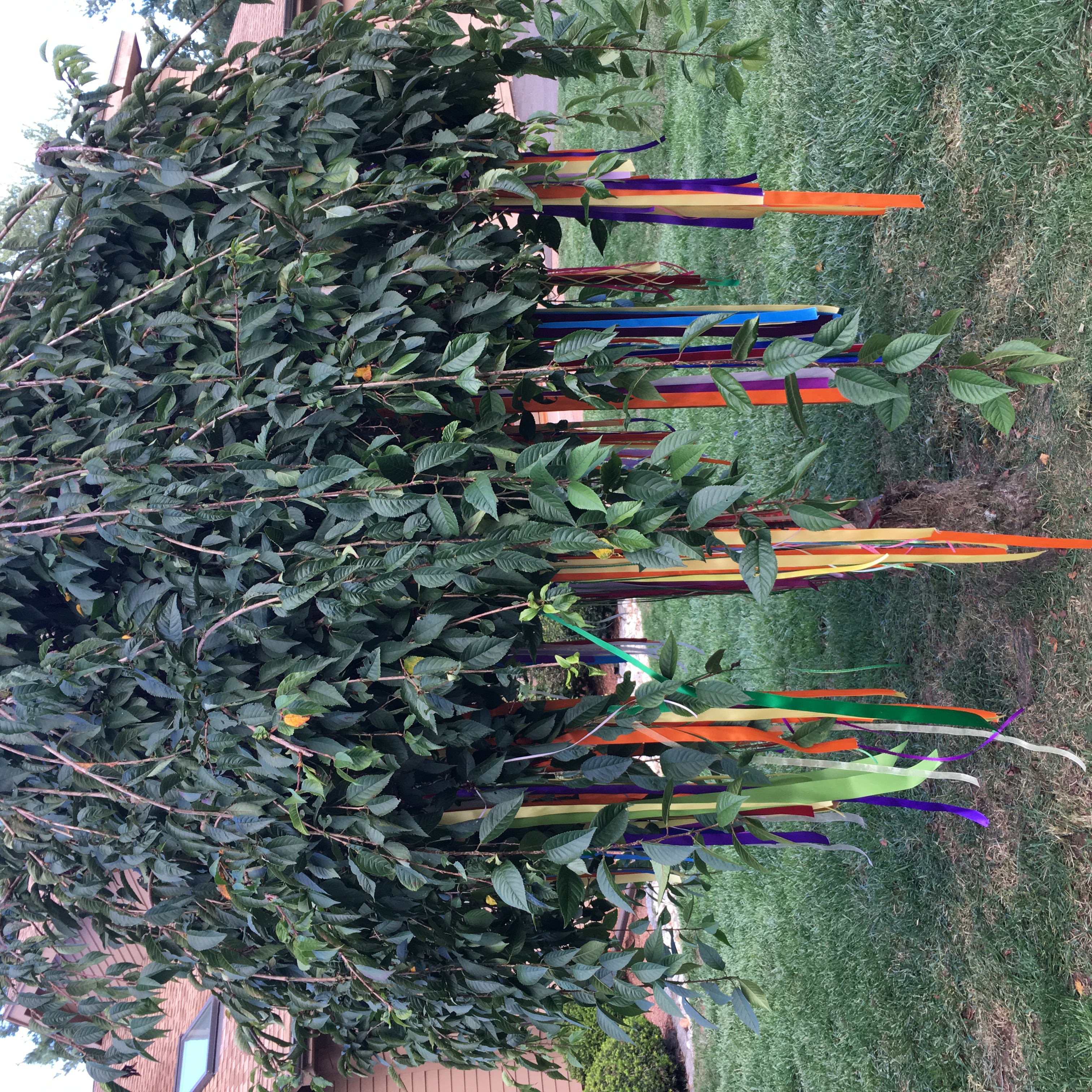 I told my husband to take a hike. In 1999, that was how I always began the story of how Dick decided to hike the Appalachian Trail that year. He had never backpacked before. He had no sense of direction. But he made it, all 2,160 miles. It took him six months. Nineteen years later, he went for a walk in our small neighborhood. When he was finished, he got frustrated because his key wouldn’t unlock the front door.  It wasn’t our front door.

Dick and I live in a condominium complex. It’s small, just 6 buildings, 24 units. The road into the complex is straight, then forms a circle. It looks like a lollipop. The 6 buildings are spread around the lollipop.

For more than 20 years, Dick got up every morning around 5:30. He’d walk at least 4 miles, venturing beyond our neighborhood, usually into the woods. He liked to walk around the reservoir. He’d finish each daily hike by walking five “lollipop” loops, adding another mile to his total. Home by 6:30, he’d shower and go to work.

When I say he walked every day, that’s not hyperbole. He walked in the pouring rain, in snow, in blizzards. He walked while the eye of a hurricane passed over us. The only day he didn’t walk was the day he was at the hospital, in the ICU, because he’d had a heart attack.

Eventually, he let the streak die. That was around 2018.  After that, he still walked, but not every day. In all those years, more than 20, he’d gotten lost only once. It was October 2017, right after a powerful snow storm. When he didn’t come home on time, I feared he might have fallen. I got into the car and went searching. I was so relieved to get him into the car. He looked terrified. It both filled and froze his eyes. That look told me I had a lot more to worry about than I thought.

He’d been mesmerized by all the fallen trees. That’s what he told me when we got home. I wondered if he’d been searching for the white blazes that mark the path on the Appalachian Trail.

Over the next few months, there were several more times when I got in the car and went searching for him because he hadn’t come home yet. I always found him right on the last leg of his route. No, he hadn’t gotten lost again. He just couldn’t walk as fast as he used to. I hadn’t realized that until then.

Alzheimer’s interferes with the brain’s signals. When the signals no longer reach the feet, the patient’s ability to walk weakens, often to the point of being in a wheelchair.  Dick wasn’t there yet. He still isn’t. But every day I see the decline. I keep a second-hand wheelchair in the garage.

A few months passed. To ease both my mind and his, I started walking with Dick. We didn’t go as early as he used to. And we didn’t go every day. Sometimes we turned back before our usual half-way point. His legs bothered him. By the summer of 2018, he no longer ventured beyond our lollipop circle.

One day in August of 2018, he went for a walk around the circle and came home distraught. He had lost the money clip he kept in his pocket. He had lost his house keys. I found both just a few steps from our front door. I thought he would be relieved. Instead, he got anxious.

The next day, he went for another walk around the circle. I knew he needed to maintain some measure of independence. I knew he wouldn’t venture out if his legs bothered him. Plus, I could see him from my upstairs office window. But that particular day, I was doing some work in another room upstairs, one that didn’t have a view of the circle.

After about 20 minutes, I heard Dick open the front door. He immediately came upstairs where I was working. He stood right in front of me and said, “The police are coming. They’re going to put me in jail.” I told him it was highly unlikely he’d done anything to warrant having the police come after him.

I hated to see him so upset. At the same time, I felt encouraged. He’d been talking in full sentences, something he hadn’t done in a long time.

I didn’t have to ask what had happened. He couldn’t wait to tell me. No sooner had he finished the tale than the phone rang. It was one of my neighbors. She told me she’d been on her phone when she heard someone at her front door, someone rattling the doorknob, pushing, trying to get in.  She ventured toward the front door and the glass panel that let her see who was outside.

Yes. It was Dick. My neighbor opened her door. He looked shocked and blurted out, “My key won’t work.” She responded, “You’re at the wrong house.” She directed Dick to our home, two doors down. She called because she knew it was important for me to know what happened.

A few weeks later, after talking with our doctor and the condo board of directors, I tied a bright orange satin ribbon around the weeping cherry tree in our front yard and a matching orange ribbon on our front door. My hope was that Dick would see the ribbons and recognize that he was home.

Alzheimer’s Disease interferes with the signals to a person’s eyes. (More about that in another episode.) One ribbon on the tree made no impact at all. So I hung more. I hung dozens of ribbons, different lengths, different widths, different colors.

A little aside here. As a wedding officiant, I often made custom handfasting cords for the couples I married. I made the cords for couples all over the country, too. So I had hundreds, literally hundreds, of yards of double-faced satin ribbon in different sizes and gorgeous colors.

Several people in the complex told me how much they liked the ribbons. One saw them as an artistic expression. Another asked me if the display was part of a spiritual ritual. Yes, I told her. It was. I think of ritual as a visible act performed with invisible intent. The visible act was to hang the ribbons. The invisible intent was for them to always guide my husband back home. 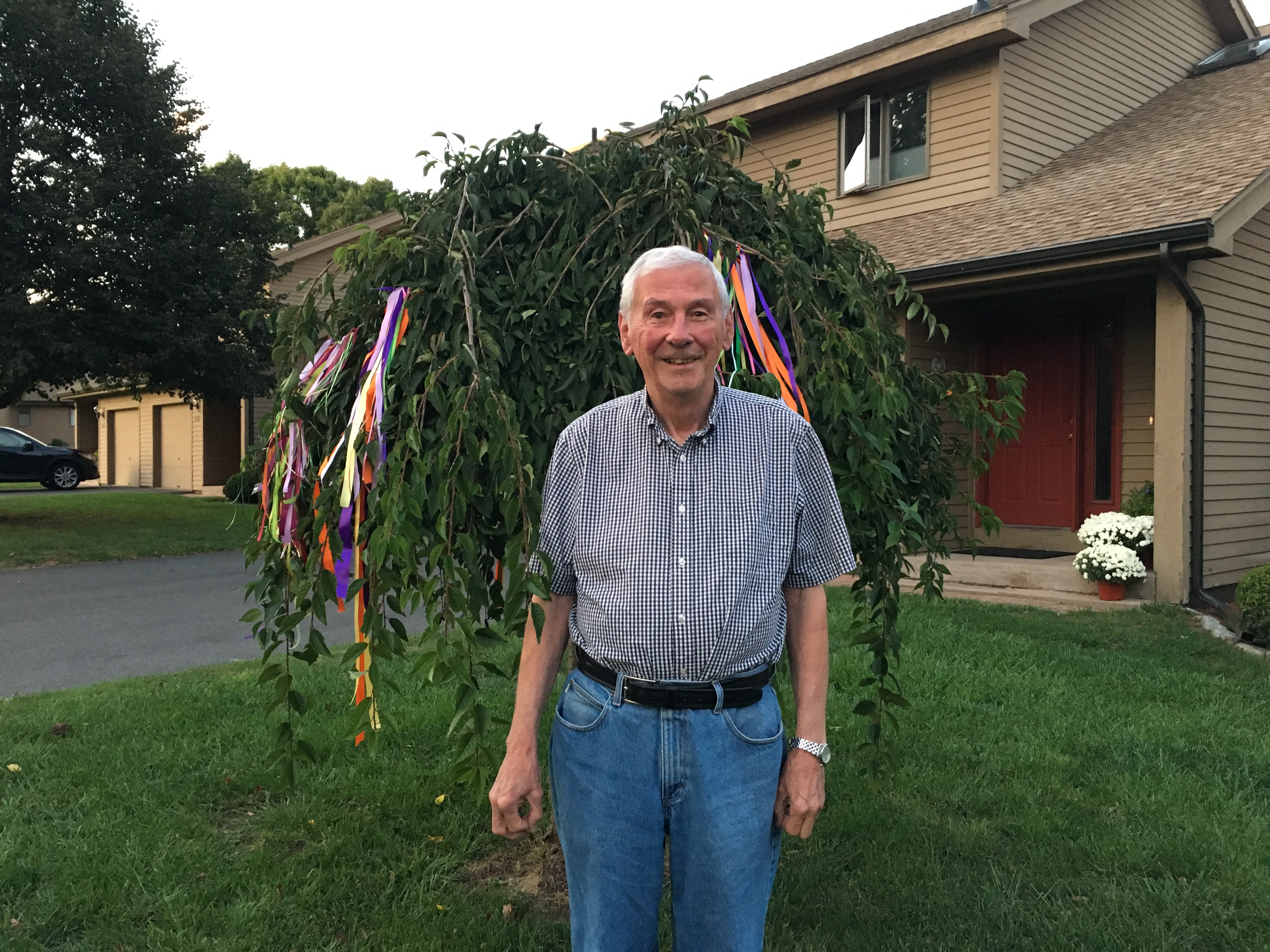 The ribbons worked. They’ve been on the tree for close to  four years now. Haven’t lost a single one. And Dick  hasn’t tried to get into anyone else’s unit. Though there was that one day…

Dick was walking around the circle. I went out to get the mail. All the mailboxes are located in one place, just a few feet from the rainbow tree. When I got to the mailbox, I could see Dick coming around the curve of the circle. He was walking with one of our neighbors, Annie, who lived in the building next to ours. They were walking arm-in-arm, the way Dick and I always walk.

Annie is a good 10 or 15 years younger than I am. She’s short, like I am. Her hair is short. So is mine. Her’s is red, a shade similar to what mine was many years ago. Mine is white now. Our builds are similar, too, though she isn’t as “fluffy” as I am.

I waved to Dick and walked up to meet them. I gave him a big smile.  Annie and I exchanged a knowing look. She whispered that she saw him standing outside her building, that he looked lost. So she walked over, struck up a conversation, and asked if she could walk with him.

I thanked her. Gently, I disengaged his arm from hers and tucked it into mine. “Let’s go home,” I said to him. We walked to the mailbox and stopped. He stared at me, angled his head to stare right into my eyes. “Who are you?”  I took a breath and said, “I’m Zita. I’m your wife, the one who loves you.” He looked over his shoulder to see Annie walking up to her front door. “Is that you, too?”

“Look for the helpers. You can always find people who are helping.” Those wise words came from the late Mr. Rogers. He got them from his mother. I’m grateful that he shared her wisdom with all of us.

When you’re caring for a loved one with Alzheimer’s, you’re both living with the disease. Yes, you each experience the disease in vastly different ways. But make no mistake. Your health is being challenged and changed, too. Just as your loved one needs the help of the medical community, you need the help of your own community.  If not right now, you’ll eventually need someone to stay with your loved one so that you can go to your own medical appointments, so you can shop for groceries, so you can simply take a walk or sit on a park bench and not feel you have to be on high alert.

Start building that community now. Look to your family and friends. They can help when you simply need to talk. If you belong to an organized religion, look to your congregation. If they can’t help with actual resources like used equipment or volunteers to shop for groceries, maybe they have other referrals they can share with you. Definitely check out your state’s Center on Healthy Aging. They’ll open up a world of resources for you. They can even help you apply for a respite care grant.

In the meantime, train your eyes to see the world in a new way.  In addition to the neighbors I’ve told you about, one of my other neighbors gave me an amaryllis bulb, complete with a pot and soil for planting. She said it might help to see something pretty. She was right.

Another neighbor emailed photos of the construction progress when the foundation of our building had to be replaced. Those photos assured me that it would eventually be safe to move back home. Another neighbor texts me whenever the UConn girls basketball team is on television. We’re both big fans. 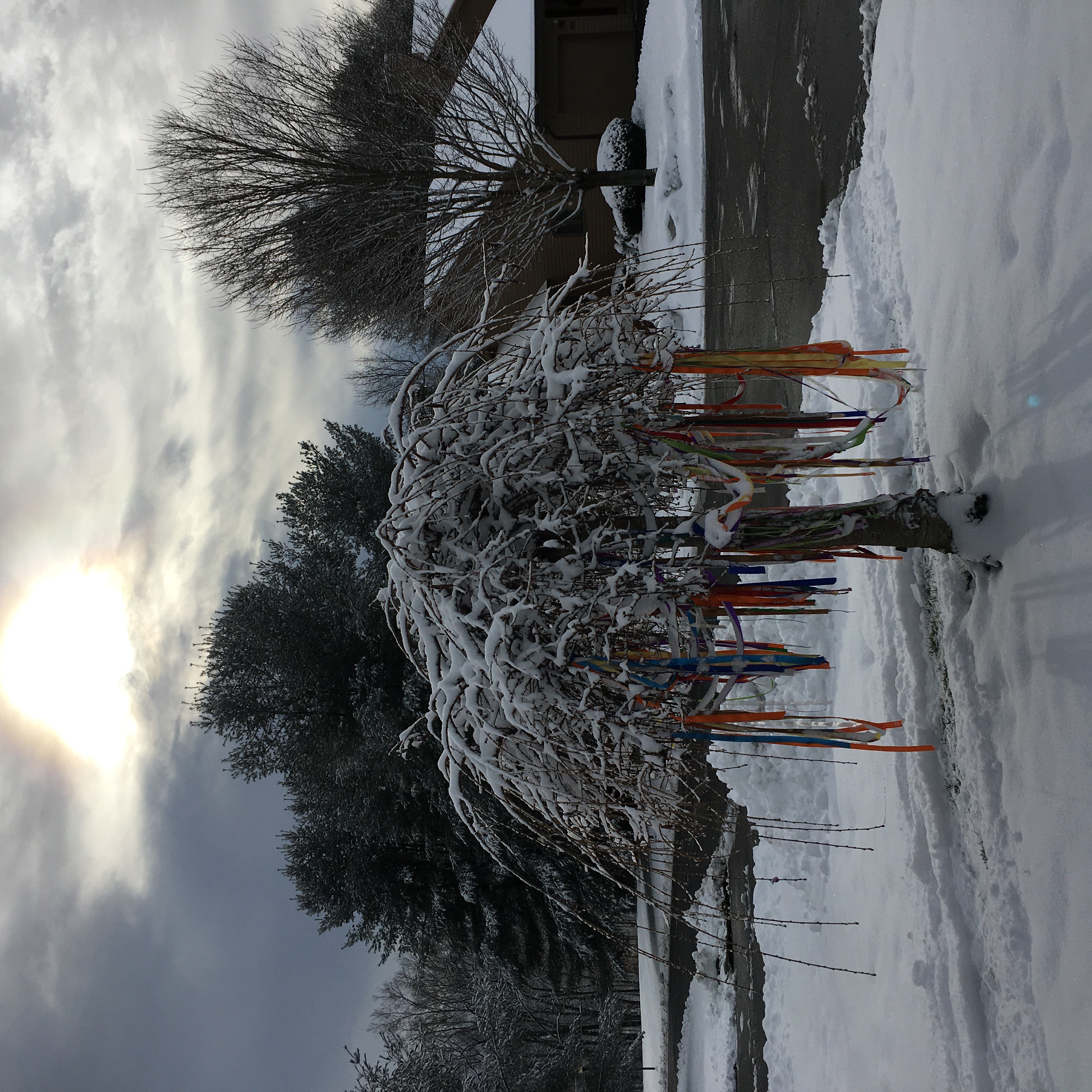 Last December, another neighbor gave me an assortment of Christmas cookies in case I didn’t have time to bake. Now she comes over on Monday afternoons to share a cup of tea and help me take inventory of all the things I’ve made for my shop on Etsy.

I could see my neighbors as just the nice people who happen to live in my lollipop circle. Fortunately, I know who they really are. They’re the helpers.

I just started a Facebook page and named it after the podcast: My Spouse Has Dementia. Stop by and tell me about the help you’ve received. Sharing what you’ve learned makes you a helper. I’d be grateful. Mr. Rogers would be proud.