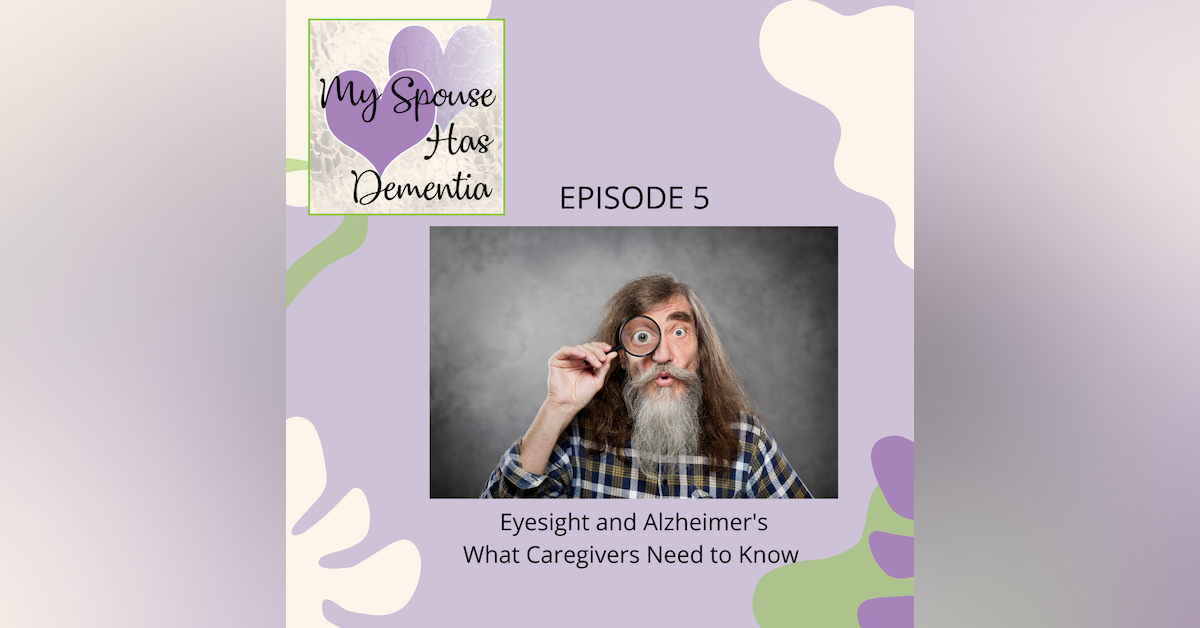 Even if a patient with Alzheimer's has healthy eyes, the brain can distort what the patient sees. Depth perception changes, too, as does the ability to recognize common items. For an 81-year-old man whose mind tells him he's now in his teens or...

On this episode, #5, Zita Christian talks about the various ways Alzheimer's Disease has distorted and/or diminished her husband's vision.

Even if a patient with Alzheimer's has healthy eyes, the brain can distort what the patient sees. Depth perception changes, too, as does the ability to recognize common items. For an 81-year-old man whose mind tells him he's now in his teens or younger, seeing his reflection in a mirror can be alarming.

Please see the transcript for information and stories shared on this episode.

Did you know that in addition to robbing a patient of memories, Alzheimer’s affects the patient’s vision? I didn’t. So there I was, well past midnight, lying on the stone cold kitchen floor, afraid to move, calling for my husband. Moments later, there he was, standing over me, his foot just inches from my outstretched hand, calling into space, “Where are you? Where are you?”

Here’s how it happened.

One night a few years ago, I dozed off in the living room while watching something on television. Dick had gone upstairs to bed a few hours earlier. It was after midnight when I woke up. I would have gone straight to bed but I hadn’t cleaned up the kitchen after dinner and I didn’t want to wake up to a mess in the morning. I gathered what scraps of energy I had left and lowered my legs from the recliner. I noticed that the shoelace on one of my sneakers had come untied. I thought about fixing it. That’s where my effort ended.

I went to the kitchen. There were a few dishes in the sink. I put them in the dishwasher, wiped the counters, bleached the sink, set out a clean dishrag and dish towel, and emptied the trash. I decided to leave the plastic bag in the garage until morning.

To get from the garage back into the kitchen, I had to negotiate one step, just one.

On that step, I tripped on my shoelace. I screamed! To this day, I remember falling forward, feeling my life was over. I banged my face on a doorknob, my shoulder on a cabinet, one hip and and both knees on the stone floor. I think the whole house shook when I landed.

For a few seconds I felt nothing but gratitude; I was still alive. And then the pain hit. I hurt all over. I was afraid to move. What if I had broken a bone?

Instinct took over; I cried out for my husband. In an instant, I heard him coming down the stairs. I heard him walking through the living room, into the dining room. All the while he was calling out, “Where are you?”

I yelled back. “I’m by the bathroom door!” He didn’t know how to use the phone anymore but if he could get the handset to me, I could call 911. I didn’t dwell on how I was going to get him to unlock the front door to let the EMTs in.

Dick came down the hall and stopped abruptly in front of the bathroom door. Again, he called out, “Where are you?”

How could he not see me?  “Down here!” I stretched out my arm, my hand, my fingertips. “I’m right down here! On the floor!”

He stood next to me. Frozen.

The six inches between my outstretched fingers and his foot might as well have been a mile. I managed to turn my body towards him, just a little, just enough for me to reach out and touch his ankle. He screamed. But he did look down.

He stared. “Why are you down there?”

Now it was his turn for instinct to take over. “Come on,” he said and reached out his arms. “I’ll take care of you.”

He helped me up. Nothing was broken. I took two aspirin, grabbed several ice packs and we went upstairs to bed.

The next day, half my face was black and blue. My knees were swollen. I was sore all over. The day after was worse. But I survived.

On our next appointment with the neurology nurse, I told her what had happened. I also told her that Dick and I have regular eye exams. Other than cataracts, his eyes were healthy.

The nurse explained that even though my husband’s eyes are physically healthy, Alzheimer’s causes his brain to distort what he sees.

For one thing, his depth perception is off  – way off. He’ll walk over to his recliner. Instead of sitting on the chair, he sits on the arm. I can’t always catch him in time. That’s when he slides onto the floor. Riding in the car can be challenging, especially when I’m pulling into a parking space. He’s always certain I’m about to hit the car parked next to us.

He can no longer recognize common items in our home. On the coffee table in the living room, I have a big, ceramic birdbath I bought from a local potter. Perched on the edge of the birdbath are two ceramic chicadees. I used to fill the bowl with water and float candles. It was so pretty.

Having a live flame is too dangerous now. I still appreciate it as a work of art. It’s a deep shade of turquoise. The chickadees are creamy white. Dick loves birds so I always kept the birdbath angled so it would appear that the birds were looking at him. Now, he touches the little birds as though trying to figure out what they are. Not long ago, he tried to yank them off. When that didn’t work, he picked up the birdbath. It’s heavy! I’ve since moved it into the guest room.

Alzheimer’s has affected his vision in other ways, too. He thinks the people he sees on television are physically present in our living room. You can imagine how disturbing that can be. When he’s awake, we watch “safe” shows, the shows about home renovation, cooking, sometimes a nature show – as long as it isn’t about a lion taking down a gazelle.

Watching the news can really be problematic. That’s particularly sad because Dick used to be the news director at a radio station in Fresno, California. He worked at a station in Portland, Maine, too. That’s where he received an award from the Associated Press for a program in which he interviewed high school students about their views of the future.

Now he’ll walk up to the television screen, get almost nose-to-nose with whoever is anchoring the news, and have a conversation. His words are a hodgepodge of syllables but I can tell from his inflection that he thinks he’s talking to that news anchor.

Alzheimer’s Disease can add shadows to everything the patient sees. It must be like living in dimly lit rooms, wearing glasses that are always smeared.

I think that’s why Dick often reaches for something on the table or on the floor even when there’s nothing there. We have an Oriental rug in the living room. Sometimes, he’ll try to pick up a flower in the pattern of the rug. He gets frustrated.

A little aside here. I like to watch home renovation shows. Every time I see a designer pick out a busy bathroom floor tile or an intricate kitchen backsplash, I think, sure, from a design perspective, that vintage or mosaic or geometric pattern might “pop,” but if a buyer has a family member with dementia, those patterns can be a major source of pain.

Alzheimer’s also takes away a person’s peripheral vision. I’ve been told that the average field of vision that’s left is about 12 inches. That’s about what you’d see if you were looking through binoculars. Think about that. For someone with Alzheimer’s, if an object isn’t directly in the line of vision, he doesn’t see it. Learning that explained Dick’s actions the night I tripped on my shoelace and fell onto the kitchen floor. It wasn’t that he didn’t want to see me. He couldn’t see me.

For an Alzheimer’s patient, the field of vision can change in other ways, too. This week in my support group, I talked about how Dick and I went for a walk a few days ago. We didn’t get far. He tends to lean forward when he walks; has for years. That day, he leaned forward so far I was afraid he’d fall on his face!

I was reminded that when we walk, we see a point ahead of us and our body follows. We look straight forward, we walk straight forward.  But, Alzheimer’s changes a person’s posture. They don’t stand up straight. They lean forward. As their body tips, their line of vision tips. I think about all the times I’ve said to Dick, “Watch where you’re going!” On that walk we took a few days ago, he leaned forward and moved faster than ever before. I yelled, “Slow down!” He was out of control, tilting like a tower about to fall. I had to grab his arm to make him stop.

And then there’s the problem with reflections. The first time I walked past the bathroom and saw Dick talking to himself in the mirror, I thought he was being his usual funny self. I stopped to listen.

“Hello. My name is Richard Christian.” He sounded friendly. As time went by, the tone of the conversation changed.

My husband has reached the stage where he often needs assistance to use the bathroom. Seeing his reflection is like seeing a stranger. It upsets him. Understandably so. Sometimes he gets so angry, he refuses to use the toilet while “that man” is here. We have to go to one of the upstairs bathrooms, the one where I was able to remove the mirror. That means climbing the stairs. We’ve always made it in time, though just barely.

Back in the downstairs bathroom, I finally convinced Dick that if he walked past the mirror really fast, the man wouldn’t see him. That worked until the day he didn’t walk fast.

He snarled at the image in the mirror, clenched his teeth and said to me, “He’s back. And that old woman is with him!”

I burst out laughing.

My son-in-love took down the big mirror over the dresser in the bedroom. But my office is upstairs in one of the bedrooms. When we moved into the condo 36 years ago, this room was my daughter’s bedroom. Before the move, she enjoyed a much bigger bedroom. To help ease the transition, I had the bedroom wall that faces the window covered with a giant mirror. Now I keep the door closed.

Lately, Dick sees his reflection in the windows and on the television screen. Dust is my new friend. All kidding aside, the changes in my husband’s vision have shown up in ways I never expected. Some of the changes have been alarming, and could be dangerous.

I’ve never been on this dementia caretaker path. Maybe this is all new to you, too. I’m sharing these stories wherever I can. Share your stories, too. Join a dementia support group. The Alzheimer’s Organization can help you find a local chapter. We need to be prepared. We need to survive.